Fen Ditton Community Primary School KS2 pupils were joined by some pupils from The Galfrid School for a writing workshop and to hear the great man tell stories and rhymes at CUFC on the day of the opening of the Chisholm Trail Mural – which was created by the children.  In the afternoon Michael visited Fen Ditton Community Primary School and was joined by Helen Weinstien from History Works, and between the two of them told stories and rhymes to the whole school about local history.

Mark Askew, Headteacher of Fen Ditton Community Primary School said “This was a fantastic opportunity for our KS2 pupils to be involved in a community wide project.  It was a busy day for the children who attended workshops with Michael Rosen in the morning, and the Chisholm Mural trail opening event in the evening.

“The whole school were fortunate to be able to participate in the celebration as Michael joined our school assembly in the afternoon, sharing poems and stories, and our pupils joined in with some lovely singing.” 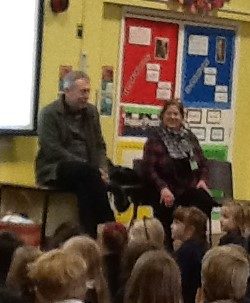